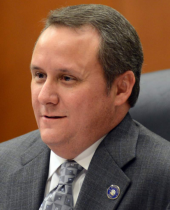 Ben Zahn was effectively re-elected to the Jefferson Parish Council from District 4 on Monday when his lone opponent was disqualified for not having paid fines she owed to the state Ethics Administration.

Meanwhile, former Kenner Mayor Louis Congemi survived an objection to his candidacy for one of the Parish Council’s two at-large seats, while one of his opponents — incumbent Councilman Chris Roberts — had one of two objections to his candidacy tossed out.