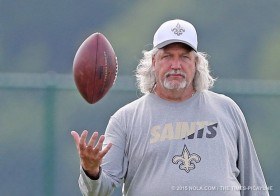 If you thought Saints defensive coordinator Rob Ryan is on shaky ground professionally if the Saints D puts up another lackluster season, things aren't much better at home.

The newly constructed $2 million Uptown home Ryan bought shortly after he was hired by the Saints in 2013 is sinking, according to a lawsuit he and his wife filed against the developer, builder and an engineering firm Monday (Aug. 17).