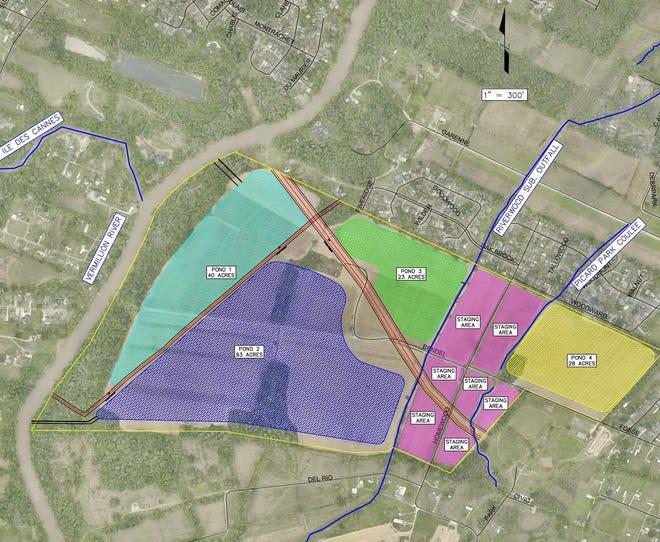 After, as 15th Judicial District Court Judge Valerie Gotch-Garrett put it, the third "mind- numbing" hearing in the case over a Lafayette Consolidated Government detention pond, she is now set to rule.

She'll determine whether LCG lawfully took the land from the Bendel Partnership in December.

Both sides said they will likely appeal if she rules against them. But if LCG loses the case on appeal, it might face a massive bill to restore the property to its original condition and return it to the Bendel Partnership.

In the meantime, work on LCG's massive Homewood Drive Detention project must remain stopped until next week while Gotch-Garrett weighs arguments over LCG's expropriation of the 372-acre plat along the Vermilion River.

"An injunction until Wednesday (April 13) is not going to kill LCG," she said.

City-Parish Attorney Greg Logan said the prolonged stoppage could cost LCG $33,000 a day in delay damages.They are negotiating with contractor Rigid Constructors to avoid those fees.

LCG relied on a rarely-used "quick-take" authorization to seize the land from the Bendel Partnership in December and begin work on a series of four detention ponds spanning some 180 acres within weeks.

It is the second time LCG has used the same statute to immediately seize privately owned land for public purposes, short-cutting the traditional expropriation process that takes months or even years, drawing litigation from landowners.

He argued Granger could not testify because of a state law prohibiting contracted engineers from participating in "considerations or actions" related to the work they are being paid to do for government bodies.

LCG's attorneys called the move a tactical ambush, and Gotch-Garrett suspended the case until the question could be resolved. On Monday, >span class="s3"> Louisiana Professional Engineering and Land Surveying Board cleared Granger to testify despite her firm's multimillion dollar contract for the project.

Wednesday's all-day hearing centered on Granger's role in the development of the detention pond project and its projected drainage benefits for the Vermilion River.

Granger testified the Homewood Detention Pond project would lower water levels on the Vermilion River by 5-6 inches during 10-year storms. She insisted that her company's stake in the project's completion had not colored her judgement.

But Smith argued that Granger could not give an unbiased expert's opinion of her own firm's design work while also standing to make millions from its completion.

"Mrs. Granger was hired with a multimillion dollar incentive to back up this decision that was already decided before she was hired," Smith said Wednesday.

Fruge said he thought design plans for the project weren't thoroughly developed because they were not finalized before work began this winter.

Assistant City-Parish Attorney Mike Hebert argued their criticisms did not prove that LCG acted arbitrarily when it took the land, which is a crucial determination for Gotch-Garrett to make.

"This is a classic example of a straw man (fallacy)," Hebert said, adding that Fruge and Smith were "throwing rocks at Mrs. Granger's work from behind the bushes."